It’s not possible to describe that event shortly. You have to describe it at full length. Overwhelming atmosphere, fabulous pieces of music. The selection of marches, dances, pop music: perfect. The British atmosphere in the foyer and in the concert hall: well done. The Westmünsterland hall: a perfect place for this event.

In the foyer the almost 700 guests were welcomed by British guards wearing red uniforms and bearskins. Posters with British symbols decorated the foyer as well. For a few hours you seemed to dive into another country.

After the sound of Big Ben had opened the concert night the audience gave a warm welcome to the Youth Orchestra with its conductor Ralf Schmittkamp when they went on stage. With the first piece of music called „Generation Fanfare“  the Youngsters showed the audience the good result of their recent rehearsals. And the guests cheered enthusiastically.

The listeners – seniors but also many young people – were looking forward to hearing good entertaining music. And their expectations have been fulfilled. Especially when the Youth Orchestra played a medley of well-known songs from the British band Coldplay.

How can you describe this fascination – nearly admiration – of many people for British musicians, artists and bands? Probably it’s due to the patriotism you come across everywhere on that island. Or another reason could be the fact that British people have always developed in a different way to people on the continent.

According to Jörg Wehling, one of the chairmen of the Musikkapelle, the orchestra had to choose between many proposals what to play. „However we didn’t want to present music of the Beatles or Rolling Stones. Fantastic bands, but there are so many more groups in Great Britain“.

The slogan of the spring concert was „The Sound of Britain“. That’s why the orchestras had not only chosen pieces of music from Queen, Coldplay and Phil Collins, but also marches like „Crown Imperial“ from Sir William Walton composed for the coronation of George VI. in 1937. Furthermore the audience could listen to wonderful arrangements dedicated to the Scottish Highlands -an exciting music experience. And Irish tunes like „Gaelforce“ composed by Peter Graham caught the listeners‘ interest as well. The conductor of the Musikkapelle André Baumeister led his orchestra in an excellent way so that the pieces of music were presented with high quality, deep sound and thrilling character.

Marianne Grütering and Annette Nienhoff as presentors gave interesting information and additional hints to the music that was played. So the audience got to know some background details about the composers or the development of the pieces of music.

The whole concert night of the Musikkapelle was really prepared carefully: the presentation of the orchestra, the uniformed clothing of black suits or dresses, the decoration of the stage or the acoustics. It all worked out well and the work that had been done was worth while.

At the end of the concert the enthusiastic audience demanded an extra piece and got a very special one: the Ems Highlander Pipes and Drums marched through the hall accompanied by hard beaten drums. Having reached the stage they played the moving tune „Highland Cathedral“ together with the Musikkapelle- an event that was deeply impressing. Standing ovations led to a second extra piece. The Musikkapelle had chosen the march „Pomp and Circumstance“ -mostly connected with the „Last Night of the Proms“ in London. The tune „Land of Hope and Glory“ is part of that piece and André Baumeister studied this melody with the listeners who now turned into singers. The text being presented on a large screen made it easy to follow the tune. When the guests came to join in the orchestra a wonderful sound of a  British patriotic choir filled the Westmünsterland hall.

Many guests admitted on their way out: what an excellent concert night! 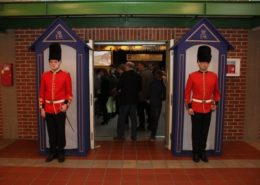 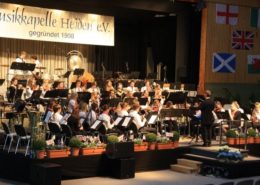 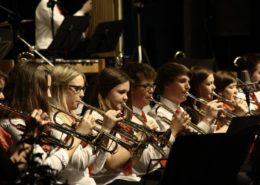 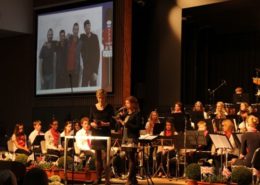 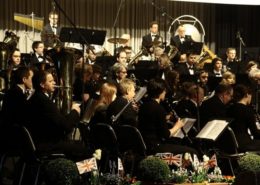 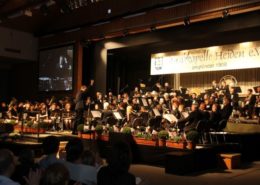 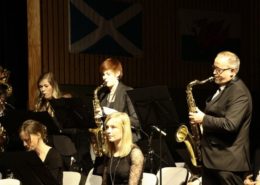 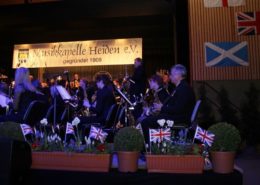 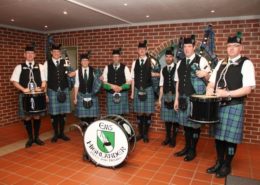 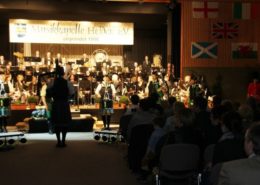 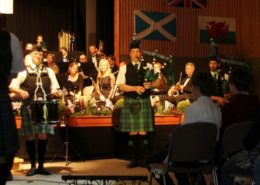 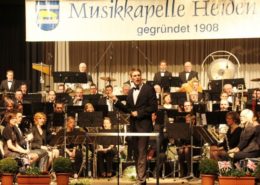 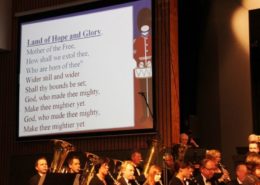 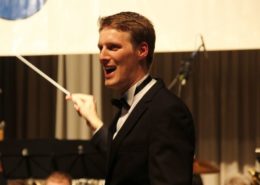 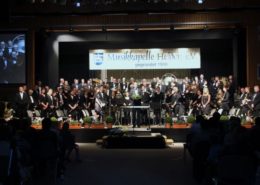 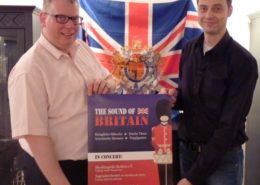