Johannes Gesing and Joerg Wehling take over leadership of the Musikkapelle

The managing board of the Musikkapelle Heiden had invited to the annual members assembly last Saturday. This year elections had to be held for more than ten different tasks and as some board members resigned replacement had to be found. However, as it was well-prepared the elections did not take all Saturday evening.

As successors to the resigning chairmen Andre Wehling and Janina Wiesmann the assembly elected Johannes Gesing and Joerg Wehling.  Markus Knuewer and Markus Gruetering took over the tasks of the secretaries.

The new managing board handed presents to the former chairmen to thank them for their demanding engagement for the Musikkapelle within the last four years.

Ludger Wehling and Gregor Knüwer decided to retire from being responsible for the music sheets. As for Ludger Wehling, the history couldn’t tell the members when he had started with this job. It seemed as though he had done it for ages. The chairmen rewarded them with presents to thank them for their really time-consuming engagement. Eva Harke and Tobias Mester were elected to be in charge of the music sheets in future.

Markus Gesing got hold of a present as well as he left his long-lasting job as youth representative. He’s followed by Sebastian Soppe.

When reviewing the year 2013, the chairman mentioned the spring concert on the theme „Dream World“, the successful band tour to Chemnitz with the outstanding result at the national music competition, the performances at the local anniversary „Schuetzenfest“ and the positive feedback to the autumn concert especially for children „Dream machine“.

Concerning the financal matters of the Musikkapelle the treasurer Stefan Wehling attested a positive result for the last year partly due to an increasing number of performances.

Looking ahead to 2014, Johannes Gesing pointed out some important dates for the band. On  30th March an open rehearsal of the youth orchestra takes place in the House of Music and young children are invited to listen to the music and try the instruments.

The intense preparation for the spring concert on 5th April has already begun.

In July the Musikkapelle will give a concert on the shooting competition (Schuetzenfest) in Kamen for the first time and will perform a military tattoo at night.

Later on in November the well-known Café concert in cooperation with the local men’s choir Concordia will be on the agenda in the Westmünsterlandhalle.

Coming to the end of the assembly Annette Nienhoff presented the latest changes on the homepage. All the information of the Musikkapelle can be read in English now which means that especially the American friends in Lancaster get the possibility to follow the latest ne 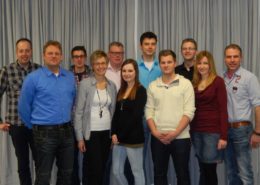 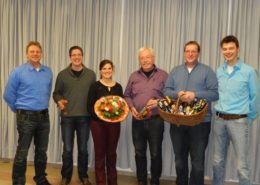 Family trip with the „Dream machine“