It would be fantastic if we finally had one or even two imperial tubas! This is the wish of a few tuba players of the Musikkapelle Heiden.

On 8th March they took the first step to reach this aim: they organized a rehearsal. The music shops in Gütersloh and Brilon gave several instruments in disposal to the musicians and the music teacher Uli Haas (university teacher at the Folkwang university in Essen, member of the Melton Tuba Quartett) leading the rehearsal could tell the men how to play this huge instrument.

Not only the tuba players were fascinated by the sound of the imperial tubas but also the conductor of the Musikkapelle André Baumeister who came along to listen to the musicains at the House of Music.

On a concert rehearsal the next day the whole orchestra could listen to the wonderful sound of the imperial tubas. Now having rehearsed with these instruments the tuba players will certainly not drop the idea of purchasing them. However, they have to work out a suggestion for the managing board how a purchase can be financed. 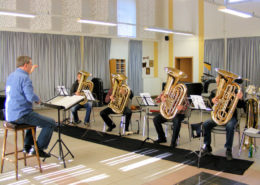 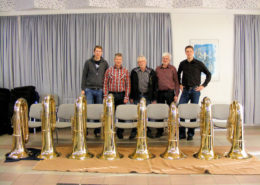