A trombone player with world class quality is engaged to perform with the Musikkapelle in the community of the devilstones this summer. Zoltan Kiss – member of the brass band „Mnozil Brass“ – will be the star of the first summer concert, which the Musikkapelle organizes on the „Old church place“ behind the new „House of health“ on 1st August.

„Zoltan Kiss is a great and entertaining musician with whom our premiere of the summer concert will certainly become a very special event“, explains Markus Grütering. He is a member of the team who is in charge of organizing the concert.

The managing board of the Musikkapelle informed the musicians about this event and some more future plans on the annual members assembly last Saturday.

But before talking about oncoming events some other topics had to be discussed.

Personalities:Wiebke Lensing retired from her task as publicity officer. Leonie Finke was elected to become her follower.

After 40 years of being second conductor Heinz-Gerd Möllmann resigned from this function. The members of the assembly thanked him with long applause. In future Ludger Wehling is willing to overtake this duty.

Reports: Chairman Johannes Gesing held a review on last year’s happenings. Especially worth mentioning was the very successful spring concert, the foundation of the orchestra school and the investment in two imperial tubas.

Honours: Christoph Harke was pleased to honour Dirk Föcker. The trombone player now belongs to the Musikkapelle for 25 years.

Dates: Before the premiere of the summer concert with Zoltan Kiss takes place, the musicians will prepare for their annual spring concert. The rehearsals for the music according to the theme „Music from the New World – American tunes from Dvorak to Glenn Miller“ have already started.

And last but not least a musical with the local primary school will be performed at the beginning of  November. An organizing team is already in contact with the teachers of the school to start planning the performance of „Max the rainbow knight“. 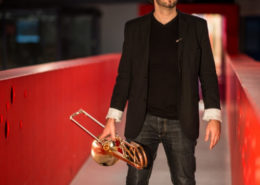 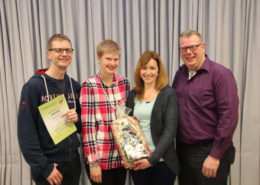