Baltic music students plan a workshop and a concert in Heiden

Curiosity and openness were the basis of the workshop that took place from 4th to 6th September in the House of Music. About 40 musicians from the Musikkapelle and the Spielmannszug Heiden were tought by five musicians of the BYP in order to be prepared for the common concert in the following week.

Dirk Klapsing, director of the concert festival „Musiklandschaft Westfalen“ managed to engage this orchestra with ist famous conductor Kristjan Järvi. The BYP consists of about 80 music students from the entire Baltic Sea region. Their concert in Heiden will be the start off of their European tour.

The idea of this workshop was brought up by the Heidener Dr. Dirk von Ameln. He is the chairman of the Baltic Sea Music Education Foundation.

„This workshop offers the possibility to the Heidener musicians to be part of a great musical education and to play in a recommended orchestra under a very professional conductorship.“
There was no tension or distance to be felt between the musicians and the teachers of the workshop. The atmosphere was very good.
„I am very positiv. This group is fantastic. Everybody is enjoying his time here. However, it is not easy to learn the new pieces of music within one weekend,“ explained flute teacher Martin Boss-Platiere.

The pieces of music mentioned are „Marche hongroise“ from Hector Berlioz and „Ritt der Waküren“ from Richard Wagner.

On the following Wednesday the Heidener players had to go for the Music Centrum Südwestfalen in the Sauerland. The orchestra had already rehearsed for several days at this centrum At this common rehearsal the Heidener got the chance to get accustomed to the conductorship of Kristjan Järvi.

Being well prepared the musicians from the Musikkapelle and the Spielmannszug went on stage together with the BYP on 10th September in the Westmünsterlandhalle. The 300 guests could now listen to the pieces of music from Berlioz and Wagner. With his very expresssive and emotional conduction Kristjan Järvi managed to melt all the musicians to one fascinating unit.

When the Heidener musicians had left the stage, the BYP performed  more classical and modern pieces to present their  variety of sound, their technical abilities and their great expressivness. The audience was pretty enthusiatic and  honoured the performance with standing ovations.

This concert was a special highlight not only for the musicians being part of it. Certainly it will be talked about for some time. 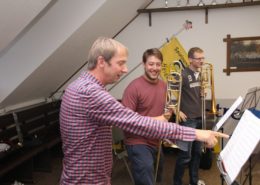 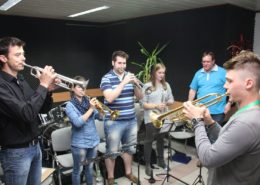 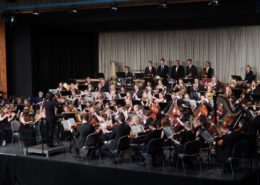